Herd Mentality —— Is one who lacks confident and firmness in decision-making or taking, leading him/her to act in a parallel manner conscientiously according to the majority of people surround. It is the inherent human nature to have this instinct that following the majority is most secure, safe and right. 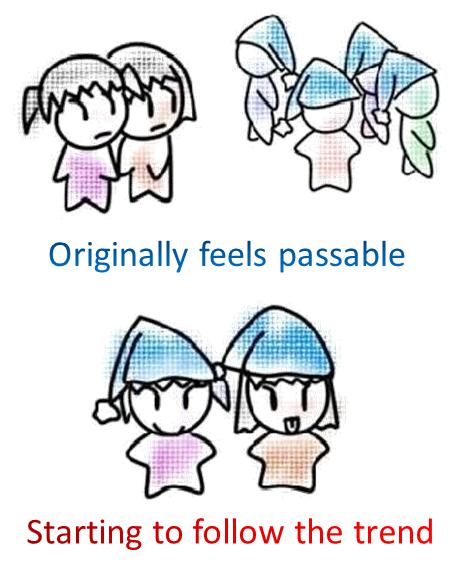 For example in a clothing store,
if one person buy clothing in the store – there is nothing special about it;

but subsequently if there are two or three persons arithmetically progressing and eventually turning into a crowd ;

the impression created is that there is a Cheap Sale going on there!

—— This is the bandwagon effect!

Most people had the obscure thought that it is impossible for aircraft to fly in the sky with its own power.

Assuming that you are living at that era, what do you think? Can aircraft fly?

During the nineteen century, people initially have faith in the Wright Brothers, but due to many flight failures and accidents, they gradually lost their confidence.
They persuaded the Wrights Brothers to give up their research but they persisted until they were successful.

Their efforts were paid off the instance they succeeded in their first flight in year 1903 and later founded the Wright Brothers Aircraft Company in year 1909.
What would have happened at that point of time, if the Wrights has listened to the people advices and give up their research ? Aircraft would not be in existence today!
Aircraft is one of mankind greatest inventions!

In the finance world, individual with a herd mentality can easily be influenced or lured by the majority to the similar investments’ sentiments. Especially in stock market, individual with herd mentality tend to invest in selected stocks based on majority of people trading in it rather then on the stocks’ portfolios itself. ( Financial Bandwagon Effect )

First sentiment: Follow the crowd; decisions rely on relatives or friends on whether to buy or sell a stock.
“My friend told me this share has potentials! He has bought it, I am also planning to buy it! How about you? ”;

Second sentiment: Monitoring news regarding stocks in the market; trade according to news reports.
“News reports predicted this share price is going to surge continuously, I am buying this share!”

Third sentiment : Learning how to trade in the stock market.

What techniques or approaches are you using to buy and sell stocks?

Herd mentality is actually very dangerous as it can delude your mind thought; at first you think “A” is correct but as the majority choose “B”; inversely you think your choice is wrong and so act in tandem with the majority to choose “B”.
There is no right or wrong in market trading; selection by majority may not necessarily be right nor selection by minority is necessarily wrong.
You should make your own decisions instead of following the majority perceptions.

Investing in stock market is a great learning experience; you must use your wisdom to make a choice and not follow blindly.

“The key to success is based on how much you understand your opponents’ attitudes and how much efforts you exerted in utilizing your investment skills.” —— From Best-Selling Book《Creating Wealth in Stock Market》

Starting from today, be a smart investor! Look for an effective tool that can help you in stock trading and proceed from there!